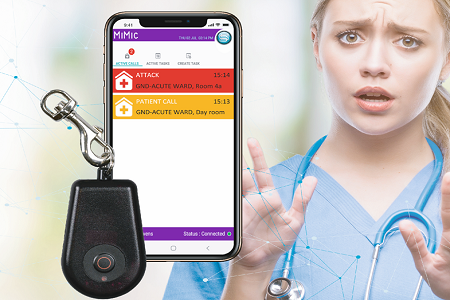 With, it claims, ‘the majority’ of the UK’s acute hospitals, and many overseas, having already invested in a Static Systems Group (SSG) nurse call system, the company has developed two attack alarm solutions which use the same technology platform.

Static Systems said: “The benefits include reduced installation, set-up, and running costs, plus ease of use for staff.”   The new Ultima and Codemlon attack alarm systems both operate in exactly the same way, using high-frequency infrared communication between  staff fob and ceiling-mounted receivers. To connect with other systems already be on site, the Ultima solution uses TCP/IP protocol at its core, and the ‘IP-ready’ Codemlon, LonWorks technology. The systems’ ‘platform-independent’ nature of also makes them suited to integration with third-party security and building management networks.

SSG says its attack alarm solutions are ‘simple to use, and reliable’. In the event of an incident, the staff fob is ‘pulled’. Crucially, it remains attached to the individual, allowing the staff member to be located in real-time if they move and, if required, call for further assistance. The system displays multiple calls in order of receipt, with an attack signal overriding all assistance calls. ‘Sophisticated software’ provides site-specific programming of mobile devices, as well as desktop computers and indicators at staff bases.

At record we are the largest manufacturer, supplier, installer and maintainer of automated pedestrian openings in the UK,  offering a wide range of solutions capable of fulfilling the requirements of practically any entrance, from from aesthetics, design, flexibility & budget.
For healthcare facilities where hygiene is paramount, our range of...