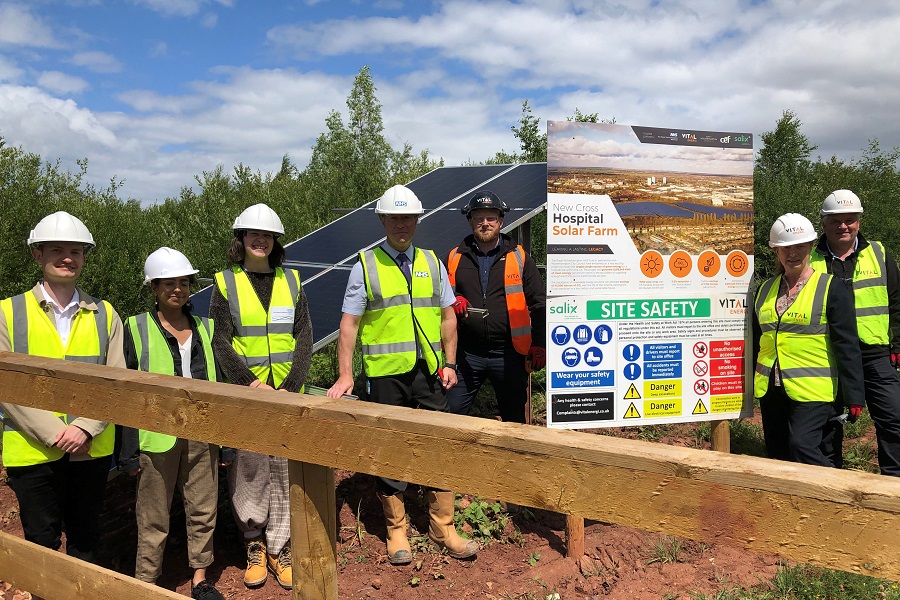 More than 15,000 electricity-generating solar panels are being installed at a new city solar farm to help power the whole of New Cross Hospital in Wolverhampton, and save 1,450 tonnes of carbon a year.

The Royal Wolverhampton NHS Trust, and project partners, had to overcome a number of challenges – including badgers, methane, and anti-social behaviour – to prepare the brownfield site, which is more than 40 acres – the size of 22 football pitches.

The panels, which will all be installed by October, are part of a multi-million-pound investment provided by Salix Finance, a government-funded body, to help power the hospital for three quarters of the year – around 288 days of self-generated renewable energy.

The new solar farm will save the Trust around £15-£20 million over the next 20 years; around £1 million a year, which will be put back into frontline healthcare.

Stew Watson, the Trust’s director of Estates Development, said: “We’re working really hard to meet the Trust’s and the NHS’s target to reach Net Zero carbon by 2040, and this investment is a huge boost to help us achieve that.  Our primary focus is always on the patient, and these works ensure that the Trust saves money on future energy bills, which we can then subsequently invest across other healthcare services.”

Salix Finance provided the Trust with nearly £10 million in 2021 and it recently received a further £33 million to carry out green energy works as part of the Department of Business, Energy and Industrial Strategy’s Public Sector Decarbonisation Scheme (PSDS).

Rob Gray, Project manager from the Carbon & Energy Fund, said: “A lot of work has happened to get the site ready for the solar panels. Firstly, we had issues with the methane venting system, which is in place to release the gases from the waste material buried under the ground. Following surveys and an Environment Agency inspection, the local authority undertook gas venting works, and an additional drainage network was installed, to ensure water escaped correctly from the site to reduce standing water and flooding. Further to the surveys and clearing the land of trees, we also had to protect the badger setts on site by creating exclusion zones for the badgers to continue to inhabit. Once the land was cleared, we installed 24-hour security.”

The solar panels are in part being installed to power the five air source heat pumps that are being installed at New Cross Hospital. Other energy efficiency measures being implemented at the hospital include steam trap replacements, pipework insulation, fitting of LED lighting, and window replacement.

Polyflor Ltd is the UK’s market leading manufacturer of commercial vinyl floorcoverings and prides itself in being a leading expert in healthcare flooring solutions.
The floor has a vital role to play in creating a relaxed environment that is safe, clean and welcoming for patients, staff and visitors. Our product portfolio provides...