A ‘Nightingale’ hospital with a difference completed 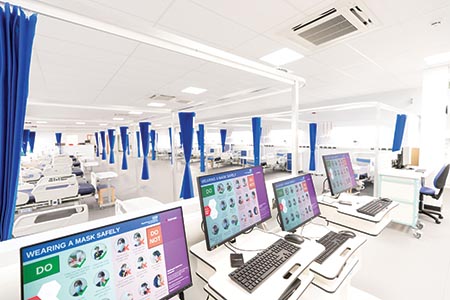 The NHS Nightingale Hospital in Exeter was the last of the eight Nightingale UK hospitals to be built. Writing exclusively for HEJ, project manager Andy Witnall, from contractor BAM, explains why it is different to others.

If you told me it was possible to build a brand new hospital in 57 days, I would not be the only one who blinked several times before saying it could not be done. Nevertheless, it was successfully achieved, and right in front of my eyes. We knew that rapid Nightingale facilities were going up elsewhere in the UK, one being built by our colleagues in Harrogate, and some in under two weeks. For reasons I shall now explain, circumstances in Exeter took us to a whole new level of amazing.

Nightingale Exeter is a brand new, 116- bed hospital. Of those 57 days it took us to create it, nine were for initial demolition works, and commissioning is included in that timescale. But why not in eight days? Because NHS Nightingale Exeter is different to its seven predecessors. While other Nightingales had some infrastructure in place already, our starting point was a slab, four walls, and a roof that itself needed some attention. It was an old Homebase DIY store, which had lain disused for some years. There was virtually no M&E to inherit, nor drainage, or mains services. What has in effect thus been created is not an adaptation, but a brand new building with minimal derogations to HBNs and HTMs (Health Building Notes and Health Technical Memoranda).