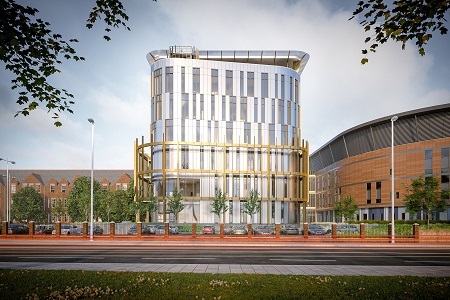 Salford Royal NHS Foundation Trust, part of the Northern Care Alliance NHS Group, has appointed BAM Construction to build a new hospital on the Salford Royal site, to support its role as the major trauma centre for Greater Manchester.

Salford-based BAM’s appointment to the £68 m major capital project follows a competitive process under ProCure22 – planning permission for the six-storey James Potter Building (previously referred to as the Acute Receiving Centre) having been granted in December 2019. The new hospital build is also part of the Government’s Health Infrastructure Plan, with the development named in honour of the organisation’s recently retired, long-standing chairman, Jim Potter. The facility will provide major trauma and high acuity surgery facilities in a modern building, receiving 90 per cent of all major trauma patients in Greater Manchester, for example, people who have been involved in a serious road traffic, accident or serious fall. It will also be the hub site for high risk general surgery across Bolton, Salford, and Wigan.

BAM is now on Salford Royal site carrying out enabling works, with a full construction programme start confirmed for 22 February. Day Architectural has worked on the design with BAM and the Trust. Scheme completion is anticipated in summer 2023.

Northern Care Alliance Chief Executive, Raj Jain, said: “This important facility has been many years in the planning with a number of our local, regional, and national partners, and it’s great to now be just weeks away from the official start date of construction. We are proud to be the major trauma centre for Greater Manchester, and this centre, with our specialist clinical teams within it, will allow us to provide trauma care and services to an additional 400 trauma patients per year.

Rob Bailey, BAM’s Healthcare Construction Manager said: “We have worked extensively on the design and programme with the Trust to understand fully what its requirements are, and to focus completely on what matters to it. That is how buildings should be delivered, with the outcomes the client wants at the centre.”

The 9,800 m2, six-storey centre is set to include a resuscitation area, five emergency theatres, inpatient beds, diagnostic imaging, and a helipad. Ian Fleming, North West Regional director for BAM, said the company had adapted its construction operations to ensure the safety of its workforce, and welcomed the new centre. He said: “These facilities are right on our doorstep, so we know very personally just how important they are. I’m very proud of our partnership with Salford Royal, and the trust the organisation has  have placed in us.” Rada is the leading manufacturer of healthcare taps and showers.
We understand that delivering a clean and safe healthcare space creates tough demands.
Modern water management plays an active role in tackling waterborne infections and conserving vital resources.
Our range of taps and showers have been specifically designed to meet...