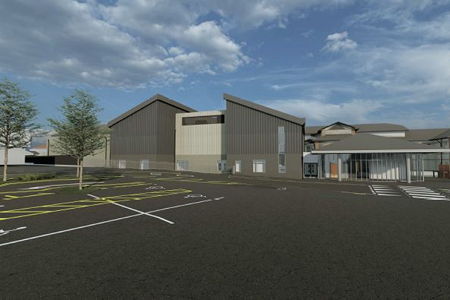 The hospital’s current oncology ward, Lowen Ward, will re-locate to the new unit in autumn 2022. The new, ‘circa £30 million’ development is being funded via national NHS capital funding streams and delivered via ProCure 22.

The new three-storey extension to the existing Trelawny Wing will see the MRI suite connected at lower ground floor level to the Imaging Department, and designed to contain up to three scanners. BAM says ‘construction challenges’ include ‘a significant range of service diversions in a live hospital environment’, and ‘considerable logistical limitations on access’. Work on the main building phase will begin shortly, following initial enabling works completed in late January, with full completion by autumn 2022.

Key project partners include Stride Treglown (architects), Arup (structural engineers), and Hoare Lea (mechanical & electrical providers). BAM’s own design practice has provided peer review services. BAM will implement an employment and skills plan on the project to create both local employment and training opportunities, alongside upskilling the workforce, having already engaged with local companies, and appointed Cornwall-based partners such as T Clarke, WBM Groundworks, and Luscombes.

Sarah Caskey, Clinical matron at the Trust, said:  “Having worked within cancer nursing care for 25 years, I am delighted and honoured to have been involved from the project’s star. Nursing and medical staff, and patients, have contributed to the design of the ward and acute oncology assessment area. We will have an increase in specialised isolation rooms and overall bed provision.”  The name ‘Lowen’ is a modern Cornish vocabulary word meaning ‘joyful’.